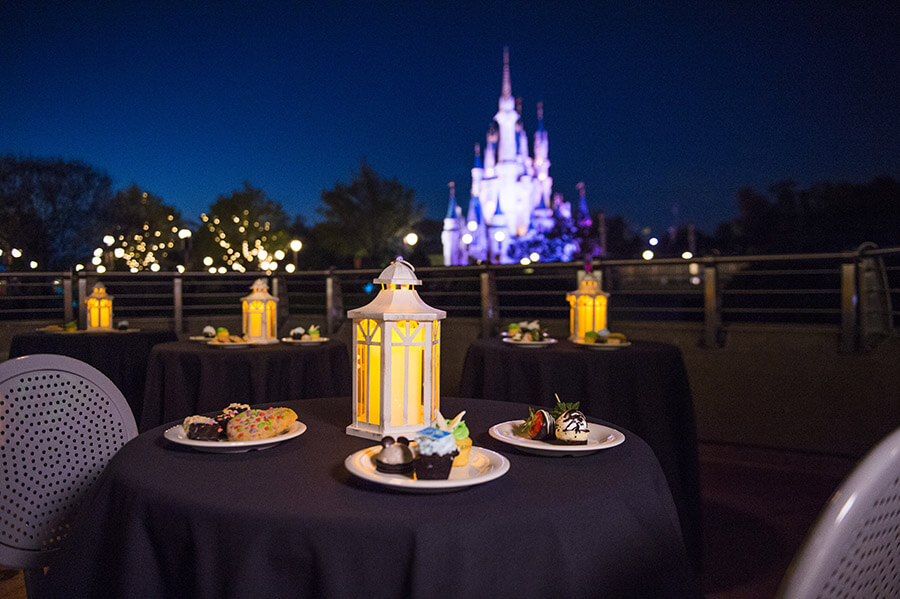 These exclusive events provide an intimate Disney experience for guests of all ages, and provide Walt Disney World fireworks reserved seating. This can be a great time saver, especially during the busier times at WDW as we typically recommend showing up an hour before nighttime spectaculars to get a good spot. So, if skipping the wait and delicious dessert sounds good to you, check out this dessert party guide!

So if you’re ready to learn about all of the 2023 Dessert Parties offered at Walt Disney World read on!

We really hope you find this post helpful, and if you are planning a trip to Disney World be sure to check out our other FREE vacation planning tools. Our goal at The Park Prodigy has always been to help you save time on your next vacation and find the cheapest Walt Disney World vacation packages!

SPECIAL NOTE: If you’re looking for the best time to visit Disney World  check out our Disney Crowd calendar! 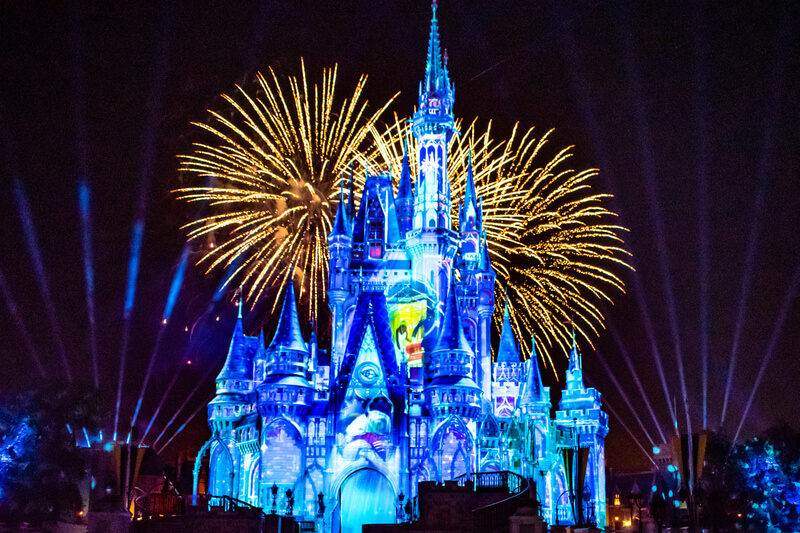 The Disney World Fireworks Dessert Party is the perfect way to end your magical day with a celebration featuring delectable desserts and an enchanting fireworks. We always recommend guests booking their Disney World vacations who prioritize nighttime shows to try a dessert party at least once! Disney World fireworks dessert party can be one of the best ways to celebrate a special occasion, or even guarantee you have a great spot to view fireworks.

What is ever Disney World dessert party for 2023?

When booking a dessert party at Disney World, you can always expect there to be the following things:

When Can I Book My Disney Dessert Party for 2023? 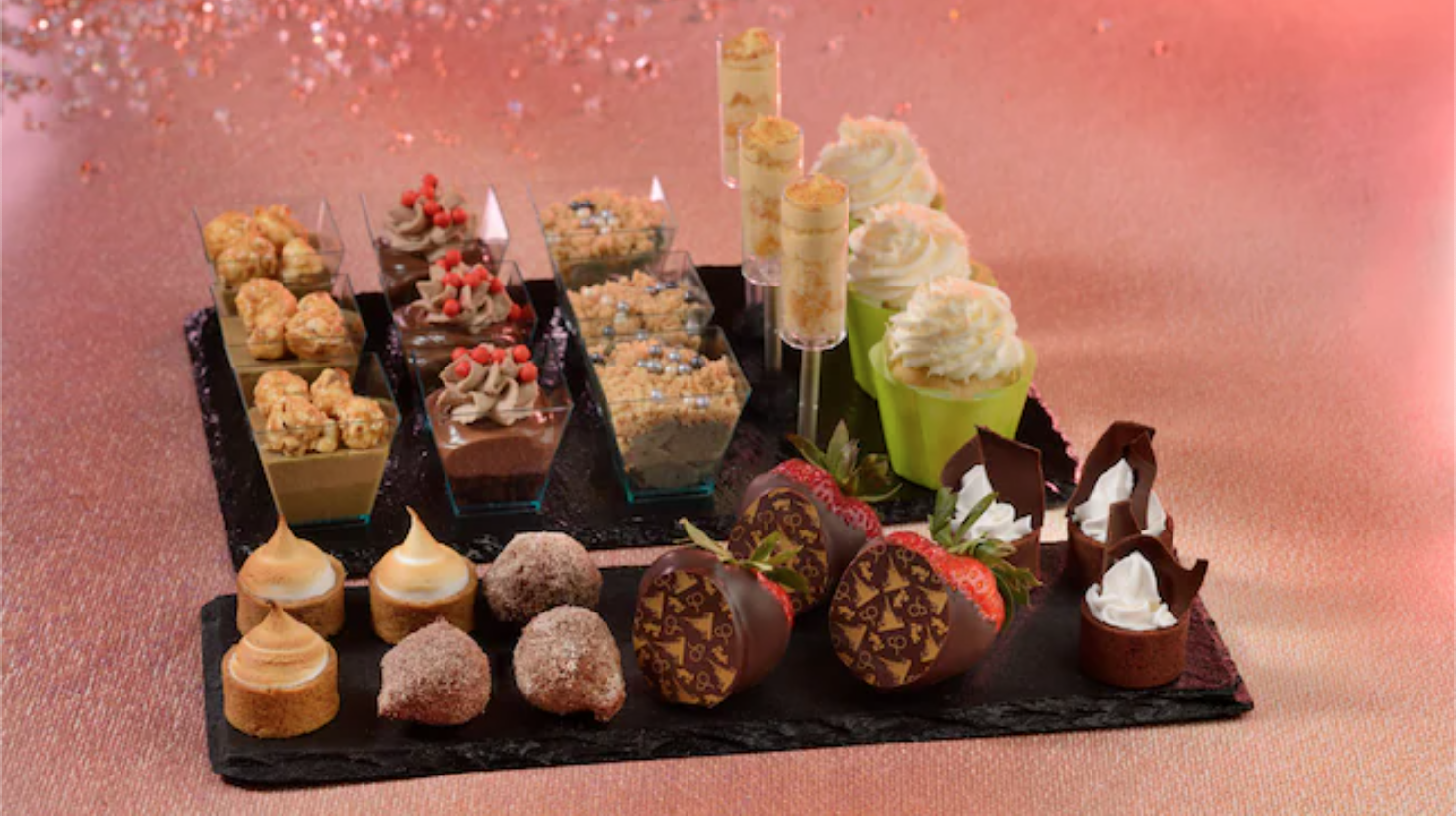 What are the Magic Kingdom dessert parties 2023?

Snacks include the following options inspired by the different lands of the Magic Kingdom:

Brand new for the 50th Anniversary Celebration at Magic Kingdom is the nighttime spectacular, Enchantment. This 2023 Magic Kingdom dessert party will be held first at Tomorrowland Terrace, with a host of 50th Anniversary themed desserts. You can expect chocolate covered strawberries, butterscotch pudding and a variety of cheeses.

You then will have an exclusive view of Enchantment for the most magical of evenings! You’ll never have to leave your seat for the Tomorrowland Terrace dessert party to enjoy the spectacular. This can be a game changer when visiting during some of the busier times of year.

This sweet celebration will cost $114 for adults and $69 per child.

For this Disney World fireworks dessert party, you will get to start your evening off at the Tomorrowland Terrace to enjoy deliciously crafted desserts, the very same as the previous party. From there, you will be escorted to the reserved standing area to watch the Enchantment fireworks.

All desserts are themed after the 50th Anniversary party, and guests over 21 can enjoy an assortment of beer and wine.

Pricing starts at $99 per adult and $59 per child, tax included.

All desserts are themed after the 50th Anniversary party, and guests over 21 can enjoy an assortment of beer and wine.

A Disney Dessert party at sea, with this incredible fireworks cruise on an iconic Magic Kingdom ferryboat. Learn the historical background of these amazing water vessels while enjoying a spread of desserts and beverages. Then finish the night off with watching Disney Enchantment from the water. While it is not quite a dessert party at Magic Kingdom, we’ve personally done this and found it super magical.

Admission for adults is $99 and cost for children is $69.

This Walt Disney World Dessert Party is extra special and extra spooky, as it is only offered during Mickey’s Not So Scary Halloween Party.  This Disney dessert party is only held on select nights that the Halloween party is running and gives you perfect views of the Mickey’s Not-So-Spooky Spectacular fireworks.

This is another one of the Magic Kingdom dessert parties, one of which is another ticket on top of your Mickey’s Not So Scary Party Ticket.

Guests attending Mickey’s Very Merry Christmas Party can opt in for a special Disney Christmas dessert party the night of their event. These events are very similar to the other Magic Kingdom dessert parties discussed above except they are only held on select special event nights.

The pricing options for both parties is $114 for adults and $69 for kids aged 3-9. Just like all other Disney dessert parties these prices are an additional charge and is not a Mickey’s Very Merry Christmas party ticket. Although we do love the fireworks at this event we simply don’t find the dessert party worth it at this price point. Especially when you consider that free cookies are included with your MVMCP ticket.

2023 Epcot’s Frozen Ever After Dessert Party – (temporarily on hold) 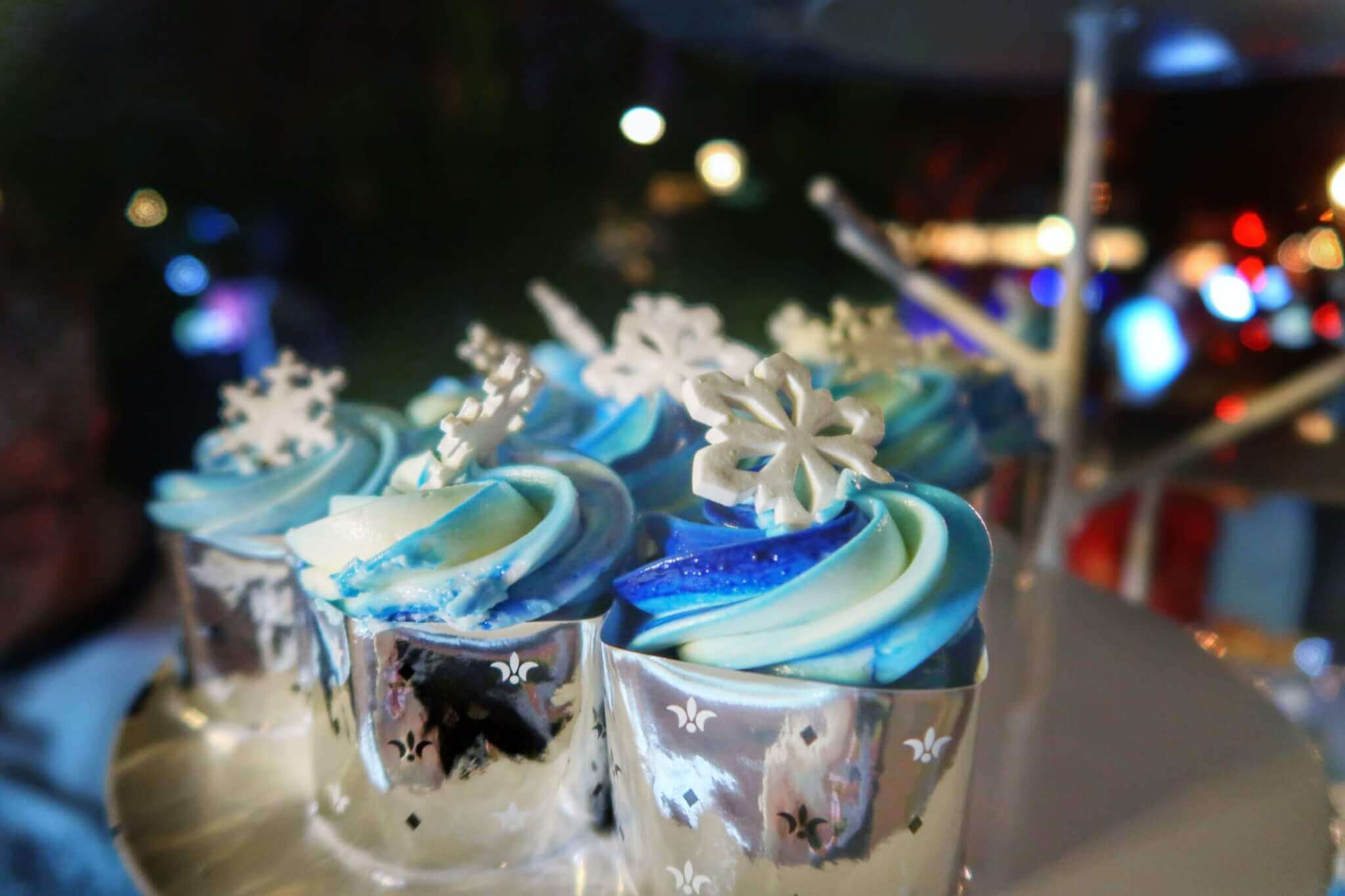 Unfortunately, we have not heard a return date for the Disney EPCOT dessert party, which was one of our favorite. In lieu of the Disney Dessert party at EPCOT, guests have had to the choice to purchase dining packages for the new 50th anniversary fireworks show, Harmonious. While EPCOT Disney dessert parties might not be returning for awhile, we still want to share with you the past party which was extra magical.

Whatever you do, don’t let this one go! This 2023 EPCOT dessert party is a magical experience offering Frozen themed desserts, VIP seating at the new Harmonius EPCOT fireworks show and a full, all you can eat menu of hot items, savory bites, top notch treats and mind blowing action stations. An assortment of adult beverages are also included in the Frozen Ever After dessert party.

And just when you thought it couldn’t get any better, guests will be escorted to Epcot’s Frozen Ever After ride after watching the nighttime show.

Disney Frozen Ever After Dessert Menu

Is the Frozen dessert party coming back?

Unfortunately Disney has not announced any new information on if the Frozen Ever After dessert party will be returning to Disney World in 2023. We would also say that the fact that they have released a brand new fireworks show in Harmonious and not brought the dessert party back might not be a good sign however time will ultimately tell.

Our Thoughts on The Frozen Dessert Party

Considering how difficult it can be to snag a Disney Genie+ for the Frozen ride, we think this is a great option during peak season. However given how big World Showcase is, this dessert party does not have the same fireworks viewing advantage as the Magic Kingdom. It’s still an awesome event for every sweet tooth in your family!

Unfortunately Disney has made the tough decision to cancel the Rivers of Lights nighttime show at Animal Kingdom. It does not come as much surprise, however on the downside there will now be one less Disney dessert party to attend in 2023. It’s important to note that we are not sure if Disney has any plans on replacing the River of Lights dessert party. However we would find it difficult for them to sell this event at this price with no nighttime show.

We are going to leave the description up just incase Disney does decide to keep this as a regular dessert party once these events are being held again!

Just like EPCOT’s Dessert Party an assortment of adult beverages are included in your admission.

In this next section, we are going to talk about the two Hollywood Studios Disney World dessert parties, which unfortunately have been on hold. Just like the EPCOT and Animal Kingdom, we have not heard and word on when or if any of these dessert parties at Disney World will be returning.

The Star Wars a Galactic Spectacular Dessert party at Hollywood Studios is an absolute must-do for Star Wars fans! The all-you-can-eat menu is very similar to the Magic Kingdom and Epcot with the addition of some galactic themed delights. Like the EPCOT and Animal Kingdom parties this event does include adult beverages. Plus, the Hollywood Studios dessert party comes with a Star Wars souvenir Chewbacca Stein!

Guest’s will be escorted from the Star Wars Launch Bay to a VIP viewing area to watch A Galactic Spectacular.

We have not heard of the Fantasmic Dessert Party coming back, but we now have seen that guests can book the Fantasmic! Dining Package, which has special seating for guests.

Unlike the other Disney Dessert Parties, this unique experience is not an all you can eat buffet. However, you won’t have to save your spot in the bleachers an hour before Fantasmic begins which is a plus. Your seat is reserved, and you’ll be served a box of specialty dessert items which include chocolate dipped strawberries, cheese and crackers, and make your own worms and dirt for kids. Adults will also receive a specialty drink in a souvenir cup.

Related post: What are the Best Desserts at Disney World?

How Do You Make a Reservation for a Disney World Dessert Party? 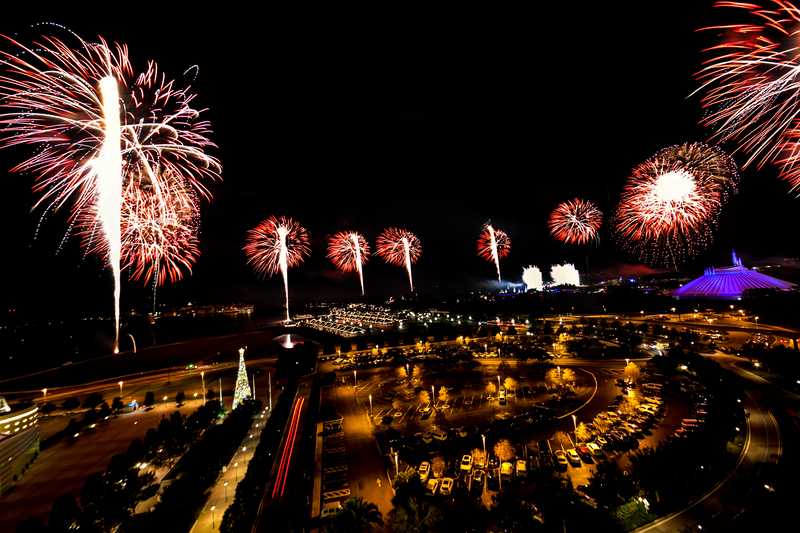 You can make your reservation on the my Disney experience app or by calling (407)WDW- DINE. It’s important to note that each of the Disney Dessert Parties mentioned above are extremely popular so advanced reservations is a must! A valid Walt Disney World ticket is required for entry

Another tip that we want to point out regarding booking your Disney World dessert party is you must prepay for your reservation. So to streamline the process be sure to have all of your payment information ready!

Is the 2023 Disney World Dessert Party Worth it?

One of the most common questions we receive is, is the Disney dessert party worth it? Now, it’s important to note that this is just our opinion here at The Park Prodigy however we don’t feel like it’s the right fit for every family. Given the high price tag and just based on the numbers alone, the average guests would have to enjoy 7-8 cupcakes for it to be a way to save money. That’s also per person, which is not a small ask.

On the flip side there is something to be said for being able to grab the perfect fireworks spot without having to show up 45 minutes before the show. Guests always have to worry about someone coming to sneak in front of them at the last minute as well.

So although we do think there are better ways to splurge on special events at Walt Disney World we can understand why some guests do prefer to book the Disney dessert party.

Related post: What are the Best Desserts in Disney Springs?

Q: What happens if the fireworks are canceled the night of my Disney dessert party?

Q: Where is the dessert party at Magic Kingdom?

A: All of the Magic Kingdom dessert parties are held in the Tomorrowland Terrace, where guests can sample an assortment of delicious treats. Guests are then brought to a designated viewing area out on the Castle Hub to watch the show.

Q: Is there a dessert party at Animal Kingdom?

Don’t forget to check out our wonderful friends over at Theme Park Today, as well