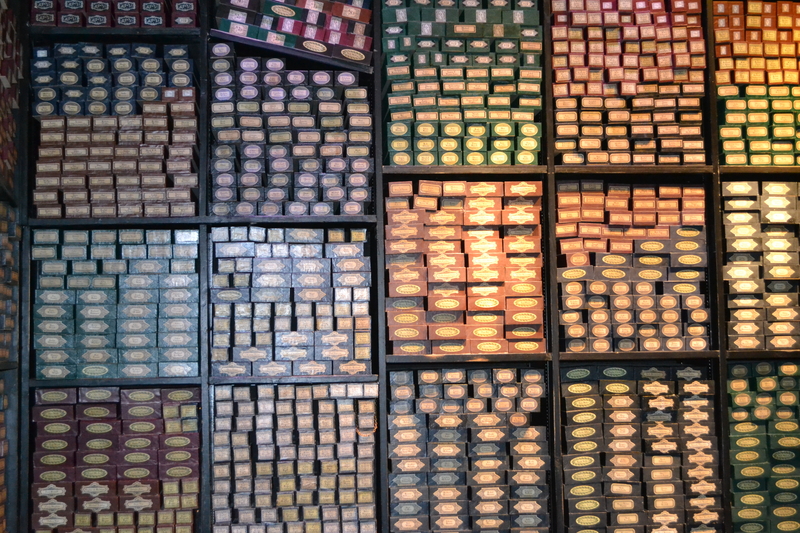 Are you still waiting for your Harry Potter letter to come in the mail? Well we’re here to help! This is your complete guide to Harry Potter wands at Universal Orlando! The Universal Studios wand selection is absolutely amazing, as there are so many to choose from. We also love the theming that goes into it, as you really feel like you’re at Ollivander’s wands in Diagon Alley!

If you’re ready for the complete Harry Potter wand guide read on! 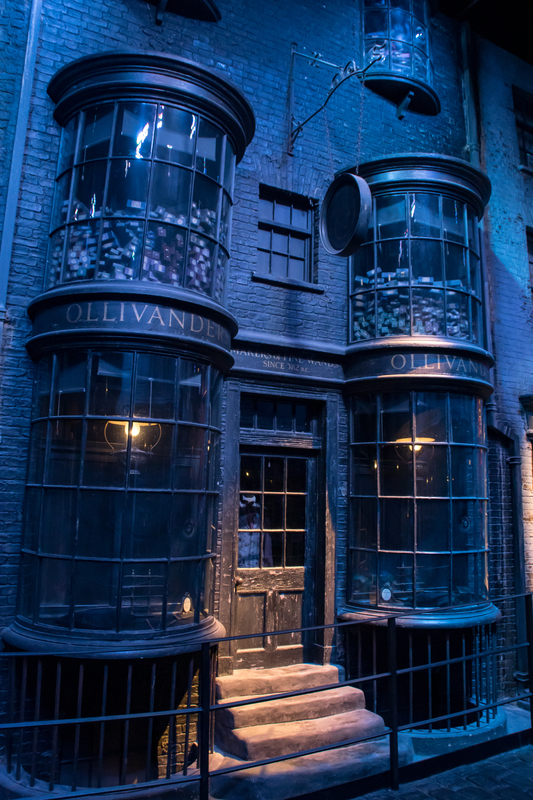 Some of you might be asking what is the Harry Potter World wand? Well, a Harry Potter interactive wand brings visiting the Wizarding World to a whole other level. Not only are fans immersed in the replicas of the alley, shops, and more, but now they get to feel as if they are true pureblood wizards with interactive wands. Ollivanders wands in Diagon Alley is the best shop to purchase an interactive wand (mostly for the experience). However, all wand spots have interactive ones, and you can also find more at the Main Universal gift shops at the front of each park as well as CityWalk, and even online.

Fans can even purchase the exact same replica Harry Potter World wands that their favorite character used in the books/movies including Harry, Ron, and Hermione! You can even take your Ollivander wand buying experience one step further and participate in an interactive ceremony. During this experience one lucky wizard is chosen to test out different wands as they all come to life just like in the movie!

What Does the Interactive Wand do at Universal?

All Harry Potter interactive wands allow wizards to cast spells all throughout both Diagon Alley and Hogsmeade. With a gentle flick and little spell, the interactive wands will create a unique, magical experience throughout the lands. Be on the lookout for the brass medallions that are embedded in the ground, that will indicate where you can use your interactive wands. Each interactive wand comes in an Ollivander’s box with a dual-sided wand map of spell locations.

How to get spell-casting assistance

The majority of spell locations are supervised by a helpful spell-caster, who mastered all the best spell-casting techniques and can coach guests to do the same. These cast members are also trained to be friendly and patient with young wizards and witches. These spell-casting helpers are there to make your experience the most magical it can be, so definitely utilize their help! Note that if a sign, spell-caster, or another cast member tells you a spell-casting location is “jinxed,” it means that location is not currently working and you’ll need to move on to the next location.

The wand is a passive device, meaning there are no electronics inside. Instead, the wand reflects light back to a sensor that tracks the movement of the Universal wands. When a correct spell movement is detected, the system activates the display. In summary, you’ve got wizard powers.

Related Posts: Complete Guide to the Best Restaurants in the Wizarding World of Harry Potter

Where do You Buy Wands in Harry Potter World? 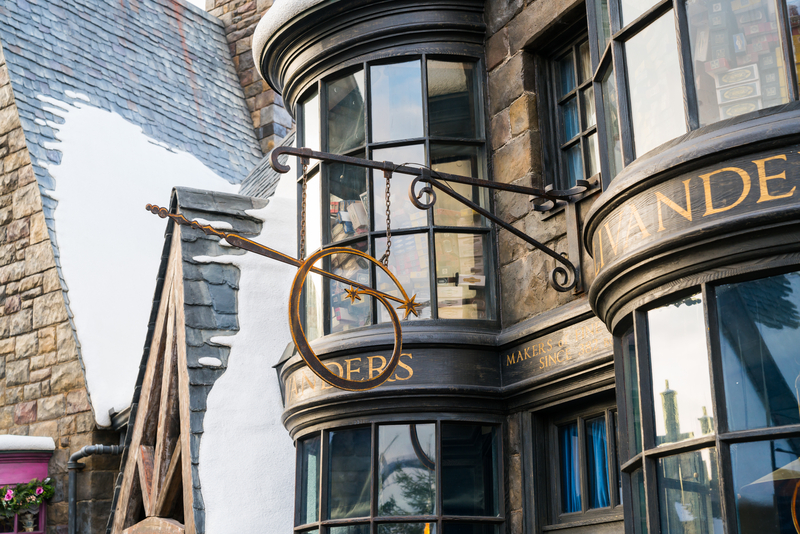 Harry Potter World wands can be found in a few places throughout the Wizarding World of Harry Potter. You can purchase a Universal Studios interactive wand at Ollivanders in Hogsmeade (in Islands of Adventure Park), at the wand cart on the path to Hogwarts, at the other Ollivanders in Diagon Alley (in Universal Studios Park), or at Wands by Gregorovitch in the Carkitt Market park of Diagon Alley.

How Much are Wands at Universal? 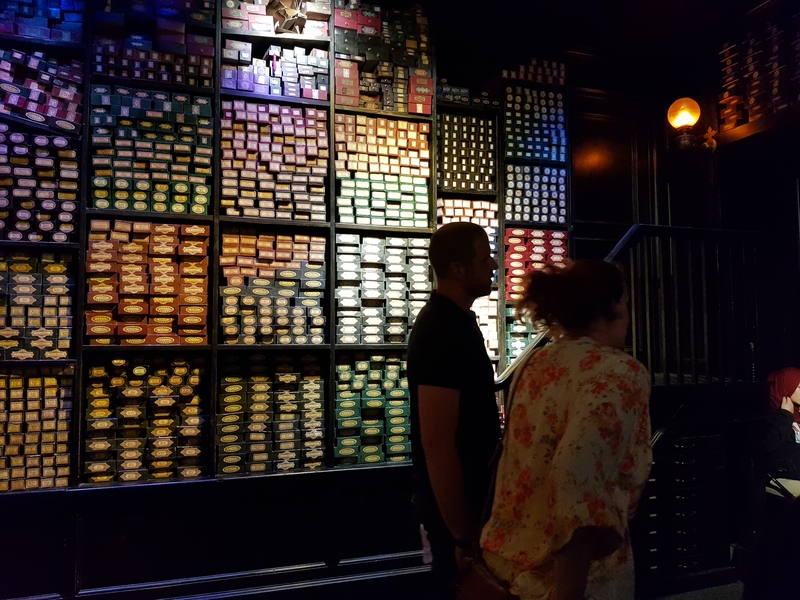 That’s only a six dollar price difference for the interactive wands!

Does it cost more for the interactive Harry Potter wand buying experience?

Another question we receive is,  how much does a wand cost at Ollivander’s when you choose the interactive buying experience? The best part is, it doesn’t cost you any extra! Just like the other experiences guests simply must purchase the cost of the wand. The cool thing about this experience is also that the wand that you select (or the wand that selects you to be correct) is going to be completely unique. This means no other famous Harry Potter characters would have the same wand as you.

Types of Wands at Ollivanders Universal 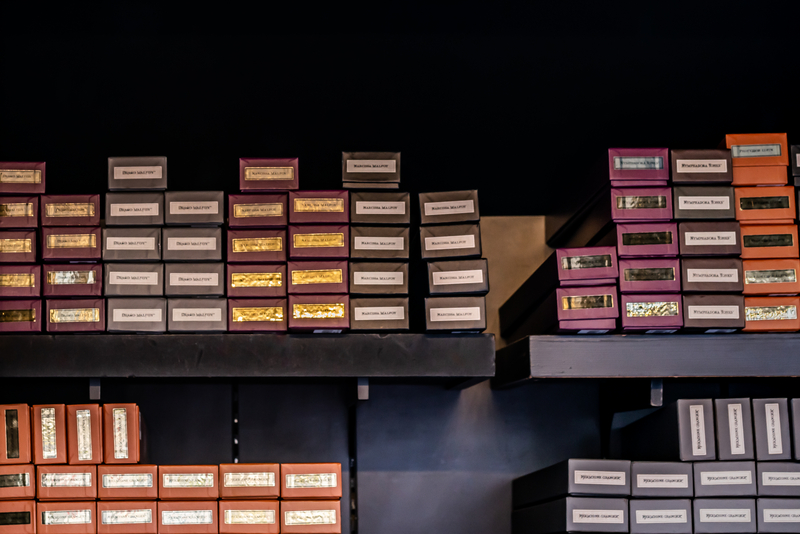 There are so many options for choosing types of wands in Harry Potter Wizarding World. For starters, blooming wizards can purchase either an original, regular wand that does not include powers, or a Universal interactive wand, which include interrelating with animatronics around the theme park.

Wizards looking to purchase Universal Studios Harry Potter interactive wands can do so based off of their favorite character, such as Harry, Hermione, Dumbledore, and Sirius. However, there are Harry Potter unclaimed wands, meaning Universal wizard wands that have yet to be claimed by anyone.

Universal designed a selection of 13 types of wands at Harry Potter World loosely based on the Celtic tree calendar that J.K Rowling used to determine which wood would be used based off of time periods and attributes. Ollivanders wand shop custom wands can be based on this Harry Potter wand chart.

Harry Potter World birthday wands allow you to choose the type of wood you’d like to use for the base of your wand off of the date you were born. This will also lead to the attributes that you have.

Below is the current list of famous Harry Potter characters you can purchase a Universal interactive wand for: 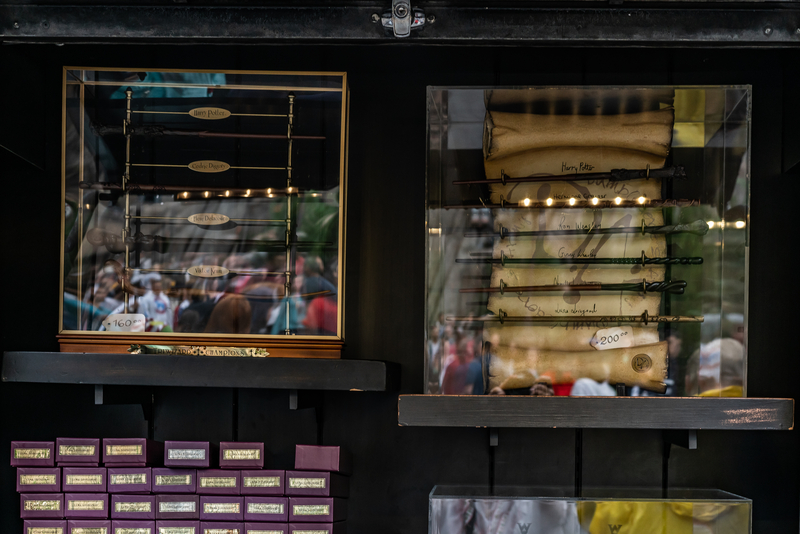 Throughout Diagon Alley, there are 16 interactive wand spell locations; 11 of them being in the greater Diagon Alley area and the other 5 in Knockturn Alley.

Hogsmeade as 9 interactive spell locations where you can use your Harry Potter World wands: 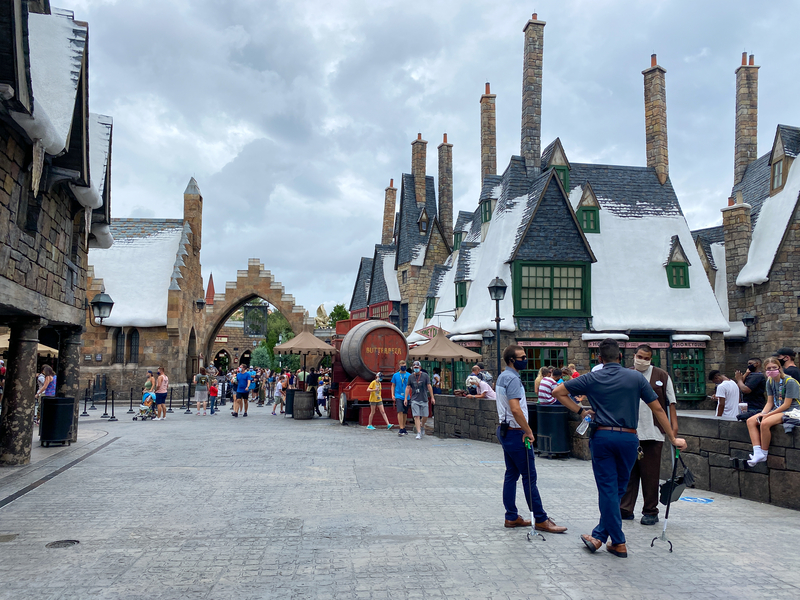 Just when you think the magic stops, Diagon Alley secret wand locations keep you on your toes! Some interactive wand secret locations Orlando include the Universal Studios interactive wand map where you’re able to illuminate Knockturn Alley’s black light to reveal themselves.

The Magical Menagerie is where you can find your fantastic beasts interactive wand spell. While wandering Weasley’s Wheezes, look up to see fireworks lighting up the night just outside the skylight. These and plenty more are to be discovered. 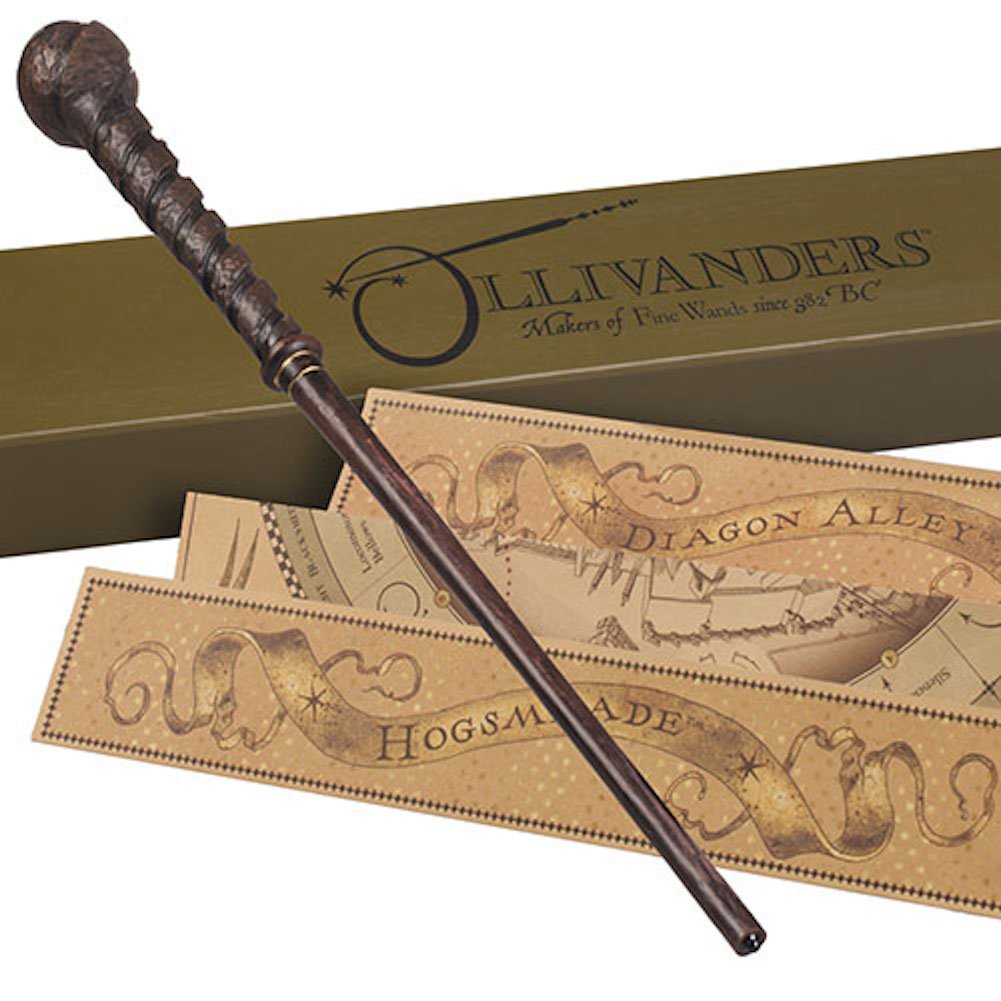 Finding your wand at Ollivanders really helps capture the Harry Potter wands Universal experience. If you speak with a shop attendant to help make a selection from the wide selection of Universal Studios Ollivanders wands, they may allow you to try out the wants before you make your final decision, this way you can get a feel for your perfect wand.

How to get selected for Ollivander’s Wand Experience

During the wand experience, one lucky guest will get chosen from the crowd by Ollivander himself! This guest gets to try out several wands until a wand “picks” them, just like Harry did on his very first trip there. Many people hope to be selected for this fun, interactive opportunity, but Ollivander does choose the person based on specific criteria. Usually, the chosen guest looks to be around 12 years old. Why? Because this is the age young witches and wizards get their letter to attend Hogwarts! So if you’re accompanying a young wizard, try to get them to the front or just in Ollivander’s eye line to get chosen.

With the help of a shop assistant, try using your birthday or a significant life event to help in your decision making. If you’re a lucky wizard, you may just be selected for the wandmaker’s show at Ollivanders. The wandmaker will pull you to the front of the crowd and help you pick a wand based off of the characteristics they describe of you, making it a very unique Harry Potter World wand experience. 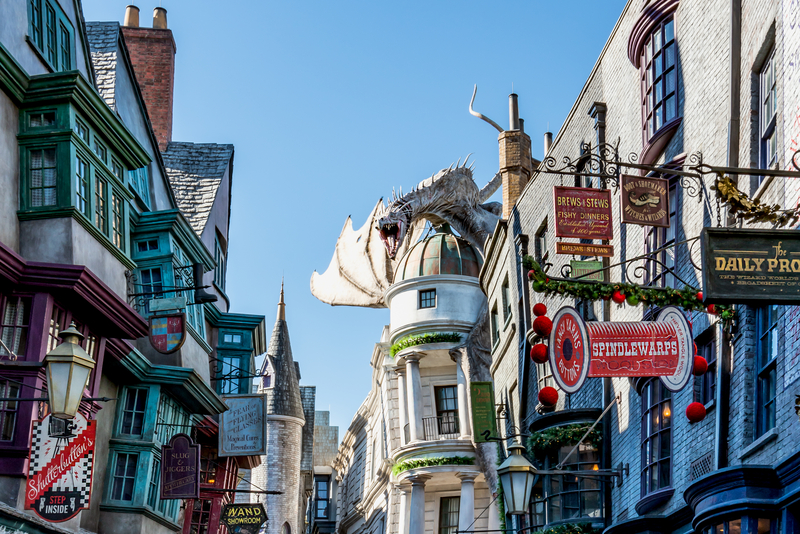 A: The Wizarding World of Harry Potter wands last for quite some time. Since there’s no battery life in all wands at Universal (and it’s all magic, of course), wands can be used in the parks every time you visit. Plus, the Universal Studio wand shops will take care of your wand if it stops working.

Q: Will someone be able to help me cast spells with my Harry Potter wand?

A: Yes, Universal does have friendly wizards who specialize in spell casting to help guests at each location. Just look for a Universal team member who can help you with your spell casting technique and wand gestures.

When Is The Best Time To Visit Universal Orlando Resort?